So today it turned out that the lesson was about creative writing.

Now, I think that for the first time in my all life I taught an entirely unplanned lesson and the big news is that I absolutely loved it.

I am currently helping some children aged 6-7 with literacy and numeracy skills, but I think that the main skill I am helping them with is building up their self esteem.

Today J. looked at me and said “I can’t write, I can’t draw.” As usual for him “I can’t” is the first thing that comes to his brain. So my job with him is more trying to find a way to “unlock” his skills and show him both that he can make it and that he can also be good at it.

But what really made my day this afternoon was seeing him interested, curious to know more about what I was telling him. And the best thing ever was that I was telling him something that I truly believed in. I was talking about writing. About stories and how you create them. How powerful it feels like when you create a character and you let them do whatever and wherever you like, with whom you like and letting them say something you want to share with the entire world.

I told him that writing is a game and that you can change all the parts of a story every time you want and the only limit to what you write is your own imagination.

And I saw a light in his eyes. A small tiny little light telling me that he wanted to try, he really wanted to see what his imagination was able to do, but he was just scared of getting it wrong.

So I told him that the best part of writing a story is that there is no right or wrong story, and that once  you learn how to play with your thoughts and out them on paper you can do it anytime you want.

He started writing. And he wrote a funny and cute story with a beginning, a middle part and an ending.

I pushed him a little bit when he finished asking him to use the junior dictionary to check for spelling mistakes. He said it was boring and he couldn’t do it. But when I left to help the other little boy, I saw him secretly taking the dictionary and trying hard to use it.

I wanted to tell him how lucky he is to live in this country. I think that the first time I heard of “creative writing” I must have been at University. I knew what a story was, I knew all the theory about it and I remember studying and analysing texts and books at school. What I don’t remember doing, thus because it never happened at school, is writing a story. A real story with a setting, fictional characters and dialogues. And I don’t’ remember drawing perceived as a class activity. I remember that we were allowed to draw during breaks or when we were very young and weren’t able to write yet. But drawing a self portrait, or the character of a story…no, that has never happened to me in school.

Which is maybe one of the reasons why I can’t really draw anything except for basic stickmen, some animals and flowers 😀 (although I have to admit I quite enjoy using drawings to explain the meaning of some words when I teach).

I don’t know if there have been any changes in Italian National Curriculum since I finished my primary school, and I am sure there are many teachers who aren’t totally happy with the actual UK curriculum and they find it poor or boring.
I can only say that when you deal with UK National Curriculum after having studied the Italian way for 29 years, the feeling you’ve got is that you are dealing with something pretty amazing. Especially when one of your tasks deals with exploring science through poetry or discussing a poem. Because if you start discussing a poem when you are 6 you will get so used to it by the time you get to high school that you could actually start feeling confident in writing a poem yourself very soon. While if you start commenting on a poem for the first time in high school, you might feel confident in writing one in your late 30s or 40s – being lucky enough to be still willing to write one.
I am not saying that everybody needs to be a poet in their lives, but it does mean that here children are given a chance to deal with a choice, to know what it is and to experiment with it.
Which I think is the best present a school can give to a child: the freedom of experimenting with the world surrounding them.

At the end of the lesson I just wanted to thank J. for that immense sense of achievement he gave to me. But when he came and asked if he could take home one of the science books to study it by himself, I was just overwhelmed by his enthusiasm, more than happy to give him the book and speechless.

So thank you J. for showing me once again the importance of motivation and for remembering that we need to try every path we can before finding the one waiting to be discovered and chosen. 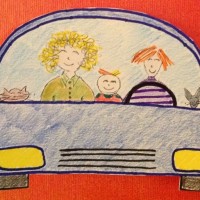 The Art and Craft of Blogging

Live to Write - Write to Live

We live to write and write to live ... professional writers talk about the craft and business of writing

The Librarian Who Doesn't Say Shhh!

The latest news on WordPress.com and the WordPress community.